Director of the Research Center of Maternal and Child Health Protection 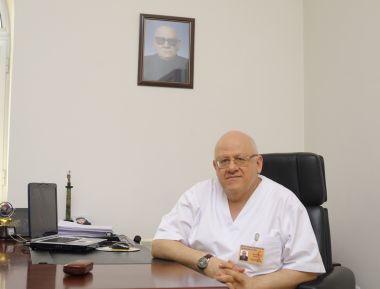 In 1977 graduated from the Yerevan State Medical Institute with an M.D. degree.

In 1982 completed his Ph.D. at All-Union Institute of Obstetrics and Gynecology, Moscow, Russia.

from 1984 to 1992 as assistant and since 1993-2010 as the head of the Department of Obstetrics and Gynecology of National Institute of Health of the Republic of Armenia.

In 1991 successfully obtained his Doctoral Degree in Medical Science and in 1994 received a rank of professor.

From 1997 to 1999 worked as the Head of Obstetrics and Gynecology Department of the Medical Center "Erebuni".

2011-up to present - Head  of  the Department  of  Obstetrics and  Gynecology of  the  faculty  of  postgraduate  and continuing education  of  the Medical University after M.  Geraci.

Since 1999, has been the Director of Center of Maternal and Child Health Protection, and Yerevan Co-operating Center of World Health Organization on Human Reproduction.

Professor Okoev’s scientific and practical activities are devoted to main problems of obstetrics and gynecology. For the first time in Armenia, he introduced and developed methods of perinatal diagnostics, such as ultrasound-scanning, cardiotocography, biopsy of chorion and cordocentesis. Also, for the first time in Armenia, successful in vitro fertilization was performed by Professor Okoev. He developed and introduced into RCMCHP practice the main principles of conducting and rehabilitation of patients operated for benign tumors of uterine and appendages.

Professor Okoev is the author of 350 scientific publications, including 3 monographies, 2 books, 5 manuals and 1 invention.

The Chairman of the Academic council of the Research Center of Maternal and Child Health Protection.

Member of the Armenian Association of Osteoporosis.

Member of European Association on Human Contraception and Reproduction.

Member of European Association on Human Reproduction and Embryology.

The Award of the President of the Republic of Armenia, 2008.