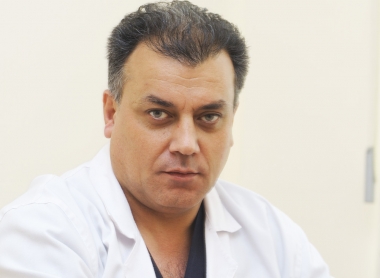 In 1982 graduated with distinctions from the biology department of the Yerevan State University.
In 1982, entered the Institute of Biochemistry of the USSR Academy of Sciences as a senior laboratory worker.
In 1984 was elected as junior scientific collaborator.
In 1990 worked as laboratory doctor in microbiology and clinical immunology department, "Diagnostics" MC.
In 1991 obtained his Ph.D.
In 1992 passed training in the Scientific-Research Center of Obstetrics, Gynecology and Perinatology, Moscow.
In 1992 was appointed as Chief of Microbiology and Clinical Immunology Department of "Diagnostics" MC.
In 1993 passed requalification on "Modern Methods of Immunodiagnostics”"in National Institute of Health of RА.
In 1995 was appointed the chief of Clinical-Laboratory Center, "Diagnostics" MC.
From 1995 to 2003 was the main expert of MH RA on laboratory diagnostics.
From 1996 to 2003 was appointed as the chairman of laboratory diagnostics commission MH RA.

Lecturer in the Department of Laboratory Diagnostics of NIH of RA.

Member of Armenian Union of Medical Diagnostics and European Union of Human Reconstruction and Embryology.